This perennial herbaceous plant, densely covered with short hairs, gives the impression of a vicious weed. Its scientific Latin name - Borago officinalis - appeared due to these hairs, as burra is the Latin for "short hair" or "bristle". Sometimes in Belarusian or Russian it can be called "bourachnik", although it has nothing in common with the beetroot (in Belarusian the word 'beetroot' sounds like 'bourak'), it is an only slightly modified scientific name. And the most wide-spread name of the plant is borage. The leaves emit rather strong cucumber scent, and the taste of this plant reminds of a cucumber with a touch of an onion.

The birthplace of borage is considered to be Syria. From there it gradually spread throughout the former Roman Empire, and then almost throughout whole Eurasia, apart from the coldest regions. Borage juice and leaf salads improve heart activity, normalize metabolism, animate, and have an anti-inflammatory effect on the body. Therefore, borage had a reputation as a tonic that supposedly improves mood, improves attention, etc.

Roman legionnaires were given an infusion of borage before decisive battles as a kind of "elixir of courage", and this idea penetrated deeply into Western culture, contributing to a significant expansion of the initial dispersal area.

Many centuries ago, borage got into the Polish-Lithuanian Commonwealth, where it was used, in addition to making salads, for pickling cucumbers. In general, there are numerous ways to use the plant in cooking.

Large, strongly wrinkled leaves (sometimes flowers) of borage are used in spring salads (in Germany, such salads are usually prepared with dill, and a special "green sauce" is also made from borage. In France and Italy, they add it to stews and soups. The stalk, peeled from the skin, is boiled as vegetables and mashed to be served as a side dish to fish or meat). In Britain and North America, the leaves are used as an ingredient in soft drinks and alcoholic cocktails (often combined with mint), and are also added to some types of gin. In China, the dish, like cabbage rolls or dalma, is cooked with borage leaves. And this is only a short, far incomplete list of gastronomic opportunities of borage.

Also, borage is an excellent honey plant and an extremely useful "companion" for potatoes and tomatoes, because many pests of these plants, including the Colorado beetle, can not stand the smell of borage.

In modern medicine, this plant is used in the treatment of bronchitis, colds, inflammation of internal organs (in particular, kidneys) and rheumatic diseases. Borage seed oil has found the greatest use: among other plants, it has almost the greatest amount of polyunsaturated fatty acids, in particular "omega-3" and "omega-6". It is used for the prevention and auxiliary therapy of atherosclerosis and to stimulate the adrenal glands, especially after serious stressful situations or taking steroid hormones. Even the ancient belief in the "elixir of courage" found to some extent the scientific confirmation: borage seed oil promotes the production of beta-endorphins in the brain, which have a direct impact on the overall mood and emotional state.

Years ago, in Belarus, borage was much more widely used than today. Famous ethnographer Michal Fedorovsky wrote that at the end of the XIX century in Western Belarus, they were very fond of a spring salad made from borage leaves and seasoned with green onions, salt and sour cream. Such a dish and, accordingly, the cultivation of borage in gardens were once especially common in the area of Slonim. So, if nowadays one set out to revive authentic regional dishes, one would need to consider this evidence of Fedorovsky. 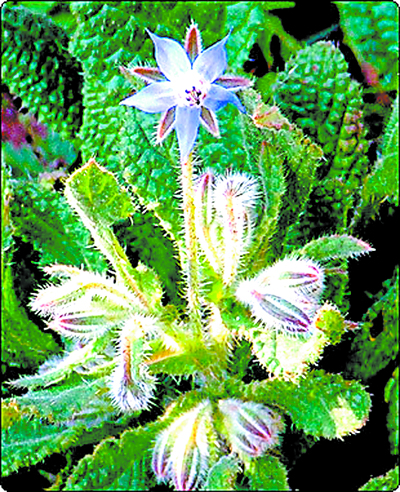 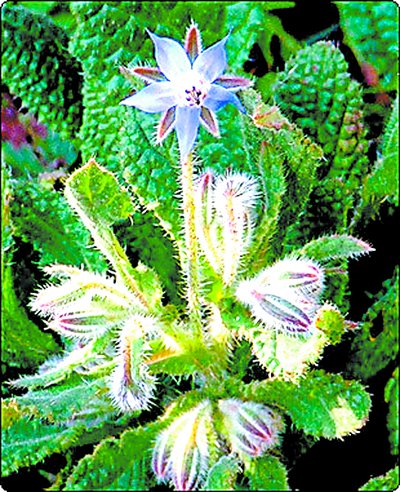